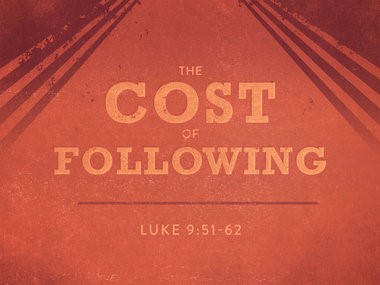 Jesus “set his face towards Jerusalem.” Jerusalem, the capital city of the Jews, was the place where religious and political power met in ancient times. Jesus’ disciples thought he was going to Jerusalem to establish his earthly kingdom there. They were excited, they had been discussing which of them would be greatest in Jesus’ kingdom. To them, Jerusalem meant power and status. But Jesus set his face toward Jerusalem knowing that this is the place where he would suffer and die.

And Jesus sent messengers on ahead who went into a Samaritan village to get things ready for him; but the people there did not welcome him, because he was heading for Jerusalem.

When the disciples James and John saw this, they asked, “Lord, do you want us to call fire down from heaven to destroy them?” Luke tells us Jesus turned and rebuked James and John. Then he and his disciples went to another village.

Jesus always made sure from day one that anyone wanting to take part in his mission would know what they were getting into. So he said to this eager, would-be disciple, "Foxes have holes, and birds of the air have nests; but the Son of Man has nowhere to lay his head" (Luke 9:58).

"Fox" was a derogatory word used for Gentiles. Jesus, himself, once called King Herod "that old Fox." Then again, maybe all that Jesus was asking the man to do was to take another look at Jesus. "Look at me. I have no job, no home, no family, no place to lay my head. Why, animals have more security than I do. Are you absolutely certain that you want this kind of life?"

Luke does not tell us what the man's reaction was, only that Jesus made it abundantly clear what was involved in being his disciple. Jesus’ surprising response reveals that there is no established roadmap for disciples. Disciples don’t know where they are going — they only know who they are going with. Followers of Jesus don’t know where they will spend their lives. They only know how they will spend their lives: serving Christ.

But he replied, “Lord, first let me go and bury my father.” While the first seeker came of his own initiative, the next one was personally invited by Jesus to join the group. Evidently, the man was curious enough about what it might mean to give it serious thought, but he still had a few things that he felt he needed to take care of. Actually, he had one big one; he had to bury his father. Then, as now, seeing that your parents have a decent burial is an act of sacred trust. It is not something to be taken lightly. Likewise, Jesus considered following him to be equally important. No matter how you interpret it, Jesus' words may sound harsh and unkind. "Let the dead bury their own dead; but as for you, go and proclaim the kingdom of God" (Luke 9:60). Jesus put the choice clearly before the man as a matter of life and death. Again, Luke does not tell us what the man's reaction was to these strong words of Jesus. We can only conclude that the man went away feeling rejected.

The third offer to follow Jesus is a combination of the other two. Like the first, this offer is a spontaneous gesture, full of enthusiasm. But like the second, it has some reservations. The man says, "I will follow you, Lord; but let me first say farewell to those at my home" (Luke 9:61). When writing this story, Luke may well have had in mind a similar occasion that took place between the prophet Elijah and his successor, Elisha. When Elijah taps Elisha on the shoulder, and throws his cloak over him, Elisha says in response, "Let me kiss my father and my mother, and then I will follow you" (1 Kings 19:20b). In this story Elijah gives his permission. He agrees that it's only right for the newly chosen prophet to say farewell to his family before he leaves to take up his new occupation. On the contrary, Jesus will not allow this man so much as a thought about all this. Jesus draws the line in the sand and tells the man that he has to make a decision then and there whether or not he's going to work for God's kingdom. "No one who puts a hand to the plow and looks back is fit for the kingdom of God" (Luke 9:62). Now, I'm not a farmer, but as a matter of fact, I know that it's impossible to plow a straight row if you're always looking back over your shoulder when you should be looking ahead. Or in more modern terms, it's difficult to arrive at your destination if you're always looking in the rear-view mirror. Determination, not just enthusiasm is required to proclaim the gospel of Christ.

To follow Jesus is to take a completely new path.

Look at all the players in this passage. They were all focused on their own agenda to the extent that they either misunderstood or rejected Jesus completely. What a contrast to Jesus’ resolute determination to complete the work God had given him, no matter what it cost him. In today’s gospel, Jesus was approached on the road by three unnamed people of unspecified gender. Often, it is the case that when an unnamed character appears in the gospels, that character is meant to represent us. We are the ones who approach Jesus and tell him that we want to follow him but cannot walk away from the lives we are leading. We say we want to be given time to put our affairs in order, to take care of those we love, to say good-bye to friends and family. But the truth is that we really don’t want to let go of what we have, and we do not want to commit ourselves fully to God. Jesus’ demands for total commitment seem unfair.

Jesus never hid the demands of the Kingdom from those who wanted to follow him. That’s why he had such trouble getting followers. Following Jesus means setting your face toward Jerusalem. No other priorities. No going back. So, what does that kind of resolve look like for Jesus-followers today?

I challenge you to find one place in the New Testament where Jesus told anybody to “go home, think it over, and get back to me tomorrow.” It simply doesn’t happen. We read in the Bible that Jesus came to Simon and Andrew and James and John at their fishing boats beside the Sea of Galilee and said to them, “Follow me” and immediately they left their nets and followed him.

In today’s lesson Jesus encounters two men who want to delay making a commitment to him, and Jesus rebukes them. Jesus’ invitation is always an invitation to do it now! Procrastination is a major problem in many people’s lives. It complicates our lives in so many ways. For some of us it is a major block to success in our work, and even in our personal relationships. It may even keep us from enjoying life abundant. When Jesus calls us, he says do it today.

There is a second reason for urgency in committing ourselves to him. Time is passing by quickly and so much of it is being wasted because we do not have a great purpose for our lives. There is no limit to what we can accomplish once we know what our purpose is and put our hand to the plow. The greatest reason that we do not use time effectively is that our lives have no driving purpose, no grand aspiration. There is an urgency about making a deeper commitment to Jesus Christ right now because of our nature and because, otherwise, we squander our most valuable resource, our time. Giving your life in service to Christ really is urgent! Do it today! Now!

Setting your face toward Jerusalem means wanting God’s will more than your own plans.

Setting your face toward Jerusalem also means submitting to God’s will fearlessly.

Finally, setting your face toward Jerusalem means sharing your faith in Jesus confidently, so that others can come to know God.

You never know the impact your faith story can have on others. You never know whose life will be changed because you were faithful and unafraid in sharing the love of Jesus.

Setting your face toward Jerusalem isn’t easy. It means giving up your own agenda and comfort to follow God’s will.

We were raised in a Christian tradition "to believe" and not necessarily "to follow." Are you following Jesus or believing in Christ?" "One can believe without following, but one cannot follow with­out believing." "Come follow me," Jesus says over and over in the gospels.

« Jesus is Here for Our Sake God has compassion! »